The Arne Jensen Lifetime Award has been created in memory of Arne Jensen, Founder of the International Teletraffic Congress (ITC) and Chair of the International Advisory Council (IAC) from its inception in 1955 until 1991. The Award is presented at ITCs to an individual who has provided exceptional contribution to traffic modeling, control and performance, and dedication to the teletraffic community.

The International Advisory Council (IAC) of the International Teletraffic Congress (ITC) is pleased to announce that the recipient of the 2016 Arne Jensen Lifetime Award is Prof. Dr.-Ing. Phuoc Tran-Gia for his huge contribution to teletraffic research and exceptional dedication to the ITC organization and community. 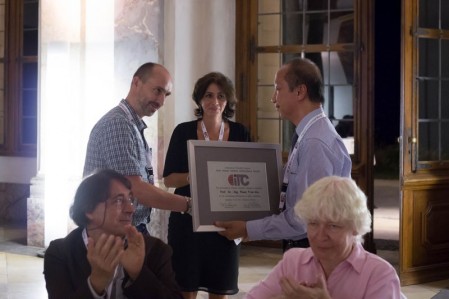 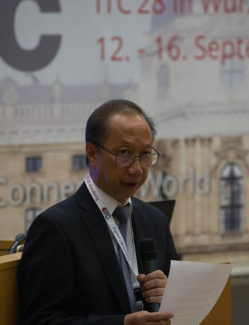 Phuoc Tran-Gia is active in several national and international research projects. He was Member of the Networks of Excellence for the Future Internet EuroNGI, EuroFGI, EuroNF, and acted as Coordinator of the G-Lab project, a German experimental platform on Future Internet research. Furthermore, he has worked and still works at noticeable projects like the CELTIC-Projects 100-GET (100 Gbit/s Carrier-Grade Ethernet Transport Technologies), SASER (Safe and Secure European Routing), and SENDATE (Secure Networking for a Data Center Cloud in Europe); the EU-funded projects SmoothIT (Simple Economic Management Approaches of Overlay Traffic in Heterogeneous Internet Topologies), SmartenIT (Socially-aware Management of New Overlay Application Traffic combined with Energy Efficiency in the Internet), and INPUT (In-Network Programmability for Next-Generation Personal Cloud Service Support); or COST Actions like ACROSS (Autonomous Control for a Reliable Internet of Services). Besides, Phuoc Tran-Gia is active in many industry projects and works as a consultant. He is Founder and Member of the Advisory Board of Infosim (Germany), specialized in IP network management products, and services and also Co-Founder and Board Member of Weblabcenter Inc. (Dallas, Texas), which is specialized in crowdsourcing technologies. Furthermore, Phuoc Tran-Gia hosted the ITC Specialist Seminars in 2002 and 2008, and the ITC 28 in Würzburg.

His research activities focus on performance analysis of the following major topics: Future Internet & Smartphone Applications; QoE Modeling & Resource Management; Software Deﬁned Networking & Cloud Networks; Network Dynamics & Control; Crowdsourcing. He has published more than 100 research papers in major conferences and journals, and received the Fred W. Ellersick Prize in 2013, which is given annually to the best article published in a IEEE Communications Society magazine in the past year.